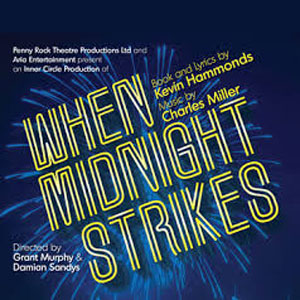 September 2013 – Upstairs at the Gatehouse

New York, New Year’s Eve 1999 – the dawn of a new millennium – and Jennifer West’s intimate dinner party for close friends and family begins to fall apart upon the discovery that her husband has been having an affair.   To make matters worse, she realizes that the unknown mistress is one of eleven party guests.  As the hosts confront their unravelling marriage, new resolutions, past mistakes, and an uncertain future merge into an explosive and life-altering evening.

Kevin Hammonds’ book is in turn hilarious and moving, the plot keeping the audience on tenterhooks until the finale. With a score by Charles Miller packed with original show-stopping songs, When Midnight Strikes gives a remarkably accurate sense of the brittle gaiety of a New Year party, with all the tensions so often seething beneath the surface.

“At a time when the future of the new British musical is bemoaned, it is a wonder that this score isn’t better known. Miller marries a pop sensibility to the rigours of a book musical and has produced something that flows with a vibrancy and urgency through Hammonds’ story, hooking us in with swirling balladry, perky comedic numbers, and a genuine sense of the storytelling power of this form.”
BACKSTAGE PASS ★★★★

“…the standard of acting on display would grace (or possibly even be better than) many a West End stage.”
THE PUBLIC REVIEWS ★★★★