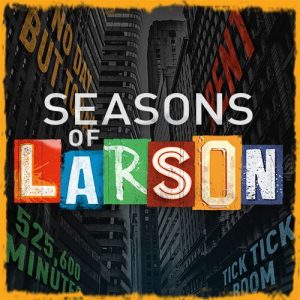 The life and music of legendary Broadway composer Jonathan Larson was celebrated in a special one-off concert on Monday 25 January 2016, when Seasons of Larson played for one night only at the Lyric Theatre, Shaftesbury Avenue.

On 25 January 1996, the day of the first preview of RENT Off-Broadway, its composer Jonathan Larson died unexpectedly at the age of 35. Tragically he would never live to see the impact his work would have, not only on the face of musical theatre but also on a generation of young artists and performers. Nor would he get to hold the numerous awards he posthumously received. 20 years to the day, Seasons of Larson will explore how Larson become a voice for a new generation on the stage, and celebrate his musical legacy that continues to resonate with people all over the world.

Jonathan Larson is best known for his rock musical RENT, for which he posthumously received the 1996 Pulitzer Prize for Drama and the 1996 Tony Award for Best Musical. RENT played on Broadway for 12 years, making it the 10th longest running show in Broadway history, and has since received productions all over the world. His earlier works include Superbia and tick, tick… BOOM!