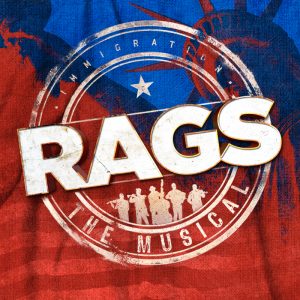 By Arrangement with MTI Europe

Produced in association with Matthew Hopton of Knockhardy Productions.

Welcome to the new world!

RAGS The Musical tells the heart-warming and powerful tale of a group of Jewish immigrants as they arrive to start a new life in America.

Fresh from Ellis Island, a young mother and her son search for a new life and a sense of home as the 20th century beckons. The streets of Manhattan’s Lower East Side may not be paved with gold, but they echo with the music of opportunity, optimism and hope.

With a ravishing score by the songwriters of Wicked and Annie and the bookwriter of Fiddler On The Roof, this is a sweeping saga of America’s immigrant past. This is the UK premiere of this eagerly anticipated new version and is directed by Bronagh Lagan (Little Women, Putting it Together, Promises Promises).

RAGS The Musical is a story of love, loss and hope. Featuring a score celebrating the multicultural music which was filling the streets of New York in 1910. It is a saga of hope and disappointments, of power and greed, of strength and love, combined with memorable music.

“RAGS is beautifully executed theatre which will sweep you away with its gritty and poignant storytelling.” – OPENING NIGHT ★★★★★

“It’s another hit from the Manchester-based Hope Mill Theatre and Aria Entertainment,
who once again prove their commitment to nurturing musicals and producing first class productions.” – BEN HEWIS ★★★★★

“ ..a strong cast that give a breathtaking performance both individually and as an ensemble.” – SINCERELY AMY ★★★★★

2014 CONCERT NOMINATED AS THEATRICAL EVENT OF THE YEAR BY WHATSONSTAGE

“Maureen Lipman as Narrator proved the icing on the cake. Who better to bring the necessary wry humour and warmth to Rags? Centrepoint will rightly benefit from this one-off staging, but it would be satisfying to see such a promising production given a longer lease of life.” – WHATSONSTAGE

“Rags in Concert was an absolute triumph, surprising and moving.” – POST SCRIPT JOURNAL

“Excellent traditional Jewish-inspired score of Charles Strouse to life
whilst the actors performed the songs around them.” – ENTERTAINMENT FOCUS ★★★★

“Had this been the production that had opened at the Mark Hellinger Theatre on 21st August 1986, it would probably still be running.” – REMOTE GOAT ★★★★