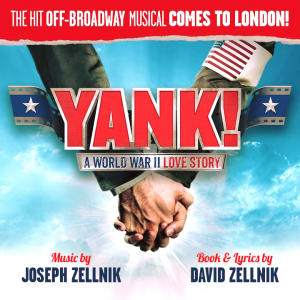 “Some stories didn’t make it into the history books”

In 1943, young Mid-Westerner Stu serves in the army as a photographer for Yank Magazine, the journal ‘for and by servicemen’. Following the men in Charlie Company, YANK! the musical explores what it means to be a man and fall in love… and struggle to survive in a time and place where the odds are stacked against you.

Based on the Off-Broadway hit production, YANK! transfers to London following a hugely successful run at the Hope Mill in Manchester earlier this year. Directed by James Baker, with a story and music by American brothers David and Joseph Zellnik, the musical pays homage to the timeless music of the 1940s.

“The score, cast and choreography are first class”
THEATRE WEEKLY ★★★★★

“Another 5-star gem. …it is a completely immersive and multi layered emotional piece of theatre.”
NORTH WEST END ★★★★★

“YANK! fully deserves its instant standing ovation and is a touching, heart-rending show
superbly performed by a cast oozing with confidence and class.”
THE REVIEWS HUB ★★★★★