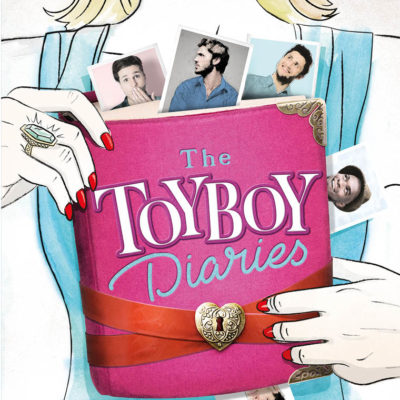 When twice-divorced Lily inadvertently finds herself under a much younger man, it opens the door to a wild new world of inappropriate relationships.

From Tom the Tender to Sam the Submissive, via Paul the Policeman, Hat Trick Patrick and Matt the Monstrous (with Old Willy and Philandering Phil mixed in along the way) Lily finally finds Ben the Bountiful.

Based on Wendy Salisbury’s bestselling memoirs The ToyBoy Diaries, with book by Simon Warne and Wendy Salisbury, and music and lyrics by Andy Collyer, this musical comedy charts the hilarious and sometimes heart-breaking sagas of mid-life dating.

Disclaimer: May contain nuts. No older men were harmed in the telling of the story…

The World Premiere of this new British Musical based on the bestselling book by Wendy Salisbury.

Based on the bestselling book by Wendy Salisbury

Music and Lyrics by Andy Collyer

“a fun, fresh and laugh-out-loud production with a female story at the forefront” SINCERELY AMY ★★★★

“lashings of raunch and tongue-in-cheek humour” THE REVIEWS HUB ★★★★