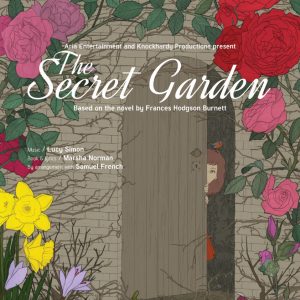 The Secret Garden Broadway Musical by Marsha Norman and Lucy Simon enjoyed a 7 performance tour around the UK in the Autumn of 2013.

It previously has enjoyed a run at The King’s Head Theatre, London and a sell-out performance at Greenwich Theatre as part of the Greenwich Children’s festival.

“Open the door to a world of secrets….”

There’s a door to a garden which has been locked for many years, the key buried and all but forgotten…
When Mary Lennox is orphaned, she must return from India to live with her distant uncle in Yorkshire. With a blossoming friendship with local boy Dickon, Mary begins to take an interest in the mysterious house she now lives and is entranced by the garden…but can she unlock the secrets that are held within?

“A little bit of earth… allows love and happiness to grow…”

“The simplicity of the production compliments the blossoming melodies of the score and the unexpectedly humorous dialogue. Plus, the performances from the cast fill the small, intimate space at The King’s Head beautifully.” – SO SO GAY ★★★★

“Jordan Lee Davis as Dickon…infused his bright and poppy tunes with a magical power of creation which lit up the stage.” – BROADWAY BABY ★★★★