The Road to Qatar! 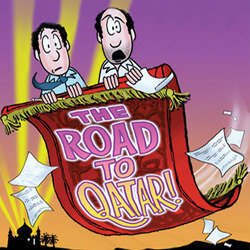 Two gay New York Jewish writers are commissioned to do the impossible: write a gargantuan Broadway musical for the Emir of Qatar featuring 100 British actors, 30 Qatari camels, 20 Arabian stallions, 17 fire-eating Croatian acrobats, 30 Russian ballet dancers, five falcons and Muhammad Ali. What can possibly happen? Musical Comedy breaks out in the Middle East! Unbelievable side-splitting surprises abound as the New York Jews travel from NYC to Dubai, London, Bratislava as they sing and dance their hilarious way on The Road to Qatar! Aloha Doha – you couldn’t make it up!

Book and Lyrics by Stephen Cole
Music by David Krane

“There’s this lovely little sibling of a show here at the Fringe. Go see it!”
BROADWAY BABY ★★★★

“If you’re looking for an hour of pure escapism, The Road To Qatar is the show for you!”
WEST END FRAME ★★★★