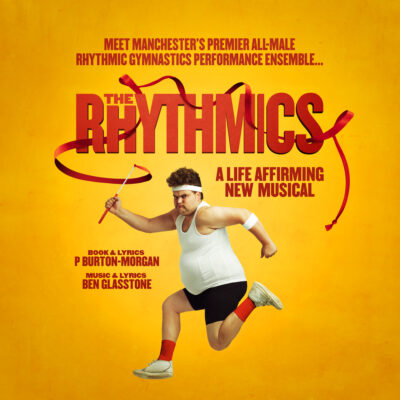 Aria Entertainment and Metta Theatre – two of the UK’s leading production companies devoted to British musical theatre presented the World Premiere of brand-new life affirming musical THE RHYTHMICS this winter, playing at the Southwark Playhouse from 2 December to 11 December 2021.

With Book and Lyrics by Metta’s Artistic Director P Burton-Morgan, and Music and Lyrics from Stiles + Drewe Award-winner Ben Glasstone (Reanimator), THE RHYTHMICS explores the crisis of masculinity via a collection of oddballs belting their way through a thrillingly catchy guitar-led score.

Hapless single-dad Grey is in a rut. Teenage daughter Silva packs him off to revive his rockstar dreams, successfully auditioning for ‘Nick & the Rhythmics’ only to realise… he’s actually signed up for an All-male Rhythmic Gymnastics troupe. Against the odds these burly blokes make it as far as the World Championships – twirling their ‘ribbons of fire’ – and along the way Grey finally learns to commit to life. Calendar Girls meets The Full Monty in this joyous new British musical.

THE RHYTHMICS is directed by P Burton-Morgan, with Choreography by Mark Smith, with Ellie Vekerk as Musical Supervisor, Erika Gundesen as Musical Director, James Nicholson as Sound Designer, Francine Huin-Wah as Costume Designer, and Will Reynolds as Set and Lighting Designer.

A cast album for the show was created last year during lockdown under socially distanced rules in studios across London, Brighton and Glasgow, and released in July 2020. The album is available via Spotify, iTunes, Amazon Music, Apple Music and other digital platforms.

Like the music video Got Your Back, created to accompany the release of the album, the full production will also feature BSL integrated choreography from Deaf men Dancing’s Mark Smith, as well as captions throughout all performances, to make the show accessible for D/deaf and hard of hearing audiences.

The Rhythmics: The Musical