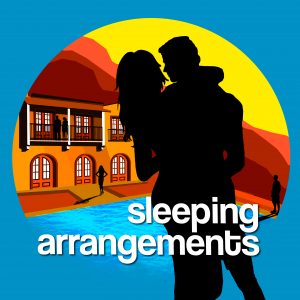 Sleeping Arrangements, had its world premiere at the Landor Theatre in April 2013. The new musical is based on the novel by Sophie Kinsella, author of Confessions Of A Shopaholic.

The Confessions Of A Shopaholic novel was adapted into a film released in 2009, starring Isla Fisher and Hugh Dancy but this will be the first of Sophie’s popular books to be adapted for the stage. Sophie Kinsella said “I am so excited to see my story on stage in such a hilarious and tuneful musical”.

Based on the best-selling novel of the same name, Sleeping Arrangements tells the tale of Chloe who desperately needs a holiday. She’s sick of making wedding dresses and her partner, Philip has troubles at work. Her wealthy friend Gerard has offered the loan of his luxury villa in Spain – Perfect.

Hugh is not a happy man. His immaculate wife Amanda seems more interested in her new kitchen than him and he works so hard to pay for it, he barely has time for his children. Maybe he’ll have a chance to bond with them on holiday. His friend Gerard has lent him a luxury villa in Spain.

Both families arrive at the villa and realise the awful truth – Gerard has double-booked. What no-one else realises is that Chloe and Hugh have a history, and as tensions rise, old passions resurface. It seems that Gerard’s ‘accidental’ double booking may not be an accident after all…

“By the end of the evening, I was all for booking a week in the attractive honey-stoned complex
complete with white pillars and faded green shutters that is so evocatively conjured up…”
EVENING STANDARD ★★★★

“a highly entertaining evening”
TIME OUT ★★★★

“Jenny Gayner delivers a well-judged performance as the pragmatic Chloe,
balancing the light and shade of her role with understanding and compassion.”
THE STAGE

“An enjoyable evening of entertainment and escapism”
SO SO GAY ★★★★