See Rock City and Other Destinations 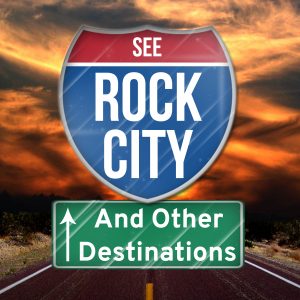 See Rock City And Other Destinations is a contemporary musical about connections missed and made at tourist destinations across America: A wanderer believes his destiny is written on rooftops along the North Carolina Interstate, a young man yearns to connect with intelligent life in Roswell, New Mexico, a woman at The Alamo steps out of the shadow of her grandparents’ idealized romance to take a chance on love, three estranged sisters cruise to Glacier Bay to scatter their father’s ashes, two high school boys face unexpected fears in the Coney Island Spook House and terrified bride-to-be ponders taking the leap… over Niagara Falls.With a score that incorporates pop, rock, folk and more, each story builds on the last to create a vivid travelogue of Americans learning to overcome their fears and expectations in order to connect and reach their dreams.

See Rock City & Other Destinations, with music by Brad Alexander and book & lyrics by Adam Mathias received the 2011 Drama Desk Award for Outstanding Book, six Drama Desk nominations including Outstanding Music, the Richard Rodgers Award from The American Academy of Arts and Letters, and the Jerry Bock Award from The BMI Foundation. In 2008 the National Alliance for Musical Theatre presented See Rock City & Other Destinations as part of their annual New Musical Festival and in 2010, it premiered off-Broadway at the Duke Theatre on 42nd Street.Now is coming to London for the first time in a brand new production for a strictly two-week run.

“..cast who rise to the occasion..” – REVIEWS GATE

“A rousing finale, in which the entire cast come together in song, brings to an impressive end..” – PLAYS TO SEE