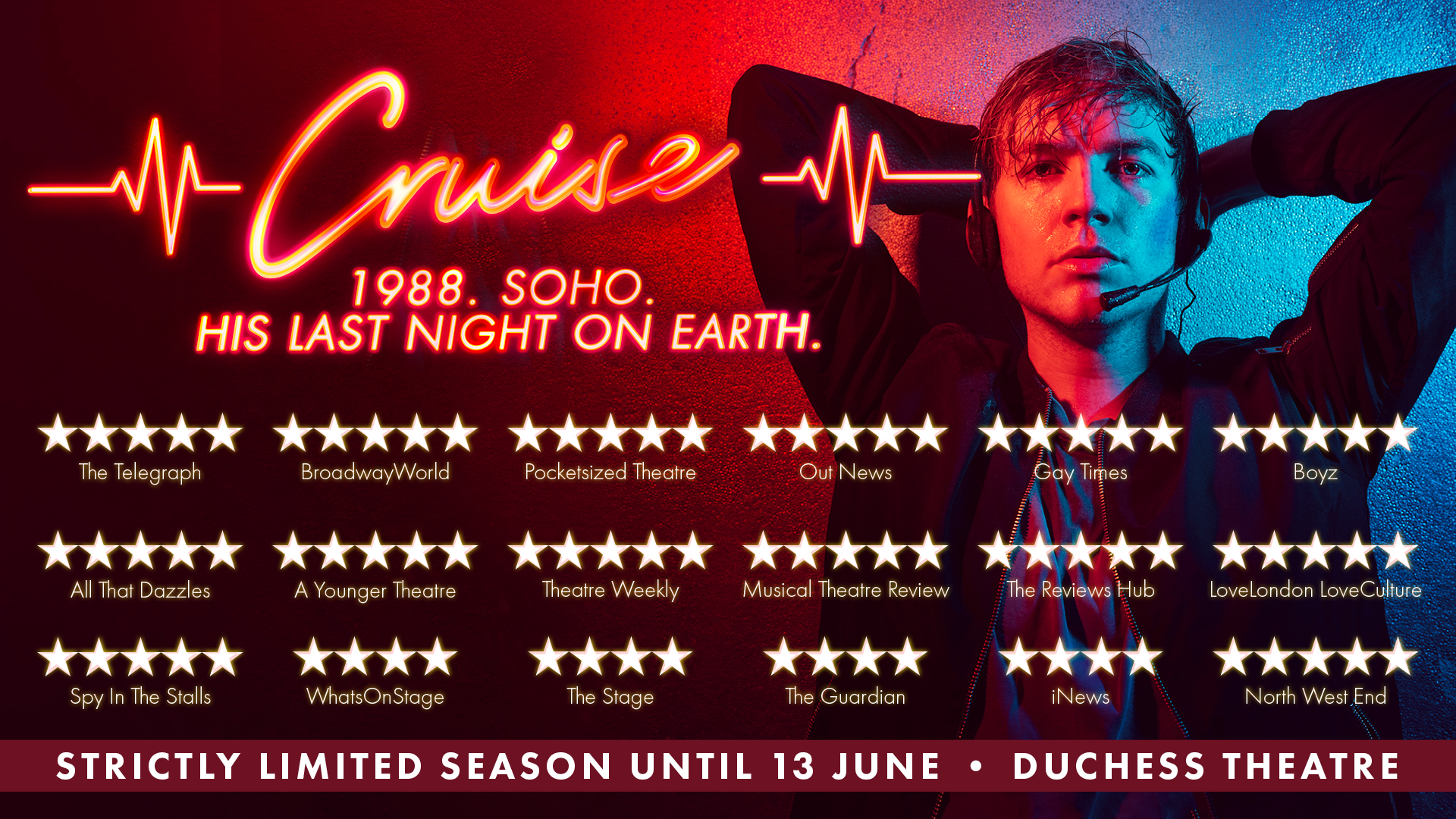 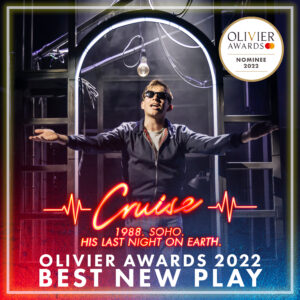 When he’s diagnosed with HIV in 1984, Michael is told he’ll have four years to live – at most. So, with the clock ticking, he and his partner Dave decide to sell their house, flog the car, and spend everything they have to party like it’s the last days of Rome. When Dave dies two years later, Michael doubles down on his hedonistic ways, spending what little he has on drink and drugs.

On the last night of his four year countdown – the 29th February, 1988 – Michael decides to go out with a bang. He puts on his favourite jacket, heads for Soho, and embarks on a long night of farewells. He says his goodbyes, dances, sings, and says yes to everything and everyone. Then, with all his affairs taken care of, Michael promptly… survives.

Michael got lucky. He’s been given the gift of life; but what kind of life can he now live?

Written and performed by Jack Holden (War Horse, West End; Ink, Almeida Theatre) CRUISE is a celebration of queer culture; a kaleidoscopic musical and spoken word tribute to the veterans of the AIDs crisis; an urgent piece of theatre, with an irresistible 80s soundtrack, which will make you laugh, make you cry, and which inspires us all to live every day as if it’s our last.

Aria Entertainment and Lambert Jackson presented the world premiere of CRUISE at the Duchess Theatre from 18 May – 13 June 2021.  Written and performed by Jack Holden (War Horse, West End; Ink, Almeida Theatre), CRUISE is an urgent, moving and inspirational new play with live music and spoken word.

Based on a true story Jack was told whilst volunteering for Switchboard, the LGBTQ+ Listening Service, this new play pays tribute to a generation decimated by HIV and AIDs.

Bringing to life 1980’s Soho, this kaleidoscopic musical is a celebration of queer culture with an uplifting 80s electronic soundtrack performed live by John Elliott.  Directed by Bronagh Lagan, the live stage production arrives at the Duchess Theatre in the West End this May.

Nica Burns of NIMAX Theatres said: “Hard as it is to find anything to celebrate in the theatre in this incredibly difficult pandemic year, being able to invite a talented new team of theatre makers to reopen the Duchess theatre is a delight.  A warm welcome to producers Katy Lipson of Aria Entertainment, Jamie Lambert and Eliza Jackson of Lambert Jackson and their playwright Jack Holden, all making West End debuts. For four weeks only, prior to the reopening of the popular comedy The Play That Goes Wrong, so book now!”

Marking Aria Entertainment’s first production in the West End Katy Lipson said: “It is an absolute honour to have the opportunity to present this play, not only on a West End stage, but as we are coming out of what has been one of the most difficult and challenging years for all. It is a brave and innovative show which brings us into a world and part of history which we may not be so familiar with. A story which we should hear about; one of survival, loss, re-building a life and looking forward to the future. All on top of the most uplifting and brilliant soundtrack. After receiving the script during lockdown, I couldn’t have imagined that we’d be presenting it as our first West End play the following year. I am so looking forward to sharing it with a live audience.”

Lambert Jackson said: “For our first West End run, we are so excited to be bringing this innovative, new and important piece of theatre to reopen the Duchess Theatre. From the moment we read the script, we knew we had to be involved. This has been a very uncertain time for theatre in the UK, and it feels right to be producing a brilliant new play by a British writer to bring important, queer British stories to audiences at this time.”

THE WORLD PREMIERE FILM OF CRUISE – A NEW ONE MAN PLAY WITH LIVE MUSIC, WRITTEN AND PERFORMED BY JACK HOLDEN AND PRODUCED BY ARIA ENTERTAINMENT AND LAMBERT JACKSON PRODUCTIONS IN ASSOCIATION WITH SHOREDITCH TOWN HALL.

Written and performed by Jack Holden (War Horse, West End; Ink, Almeida Theatre), CRUISE is an urgent, moving and inspirational new play with live music and spoken word. Bringing to life 1980’s Soho, this one-man show is a celebration of queer culture; a kaleidoscopic musical and spoken word tribute to the veterans of the AIDs crisis. Directed by Bronagh Lagan and filmed at Shoreditch Town Hall, it features an uplifting 80s electronic soundtrack performed live by John Elliott.

This new filmed play will be available to watch from 15 April – 25 April at Stream.Theatre with tickets at £12.

Written and Performed by